Home News Amati AIM VCT hits target
Our website publishes news, press releases, opinion and advertorials on various financial organizations, products and services which are commissioned from various Companies, Organizations, PR agencies, Bloggers etc. These commissioned articles are commercial in nature. This is not to be considered as financial advice and should be considered only for information purposes. It does not reflect the views or opinion of our website and is not to be considered an endorsement or a recommendation. We cannot guarantee the accuracy or applicability of any information provided with respect to your individual or personal circumstances. Please seek Professional advice from a qualified professional before making any financial decisions. We link to various third-party websites, affiliate sales networks, and to our advertising partners websites. When you view or click on certain links available on our articles, our partners may compensate us for displaying the content to you or make a purchase or fill a form. This will not incur any additional charges to you. To make things simpler for you to identity or distinguish advertised or sponsored articles or links, you may consider all articles or links hosted on our site as a commercial article placement. We will not be responsible for any loss you may suffer as a result of any omission or inaccuracy on the website.
News

Amati’s Alternative Investment Market (AIM) VCT has sold out within five days of launching its offer, raising £25 million from private investors, £13 million of which was in the first 90 minutes and £21 million was raised on the first day.

This beats its previous record of raising more than £7 million within the first 90 minutes of its fund raise in February 2019. It comes in a record year for VCTs sales with more than £821 million sold, with six more weeks until the tax year end.

The offer launched at 10am on Wednesday 16th February and one third of the £25 million was raised through Wealth Club private investors. The offer closed at 8.45pm on Sunday 20th February.

The VCT invests predominantly in stocks listed on the Alternative Investment Market (AIM) and offers a mixed portfolio of mature, revenue-generating companies as well as earlier-stage businesses with the potential for significant growth. The VCT has a bias for the healthcare and information technology sectors, both of which fared comparatively well through the pandemic.

The minimum investment was £4,000 and in total the VCT has net assets of £247.1 million. Over the past 10 years, Amati AIM VCT produced a NAV total return of 241.99%, making it the third best-performing VCT over the period.

Alex Davies, CEO of Wealth Club, comments: “Early interest was strong in securing an investment in the Amati VCT was is a bit like getting in to Glastonbury Festival with £13 million raised within 90 minutes of launch  – making it one of the hottest tickets of the season. Amati has a strong track record of delivering attractive returns and has paid steady dividends which is why it’s a particular favourite among clients.

This year over £821 million has been placed into VCTs, which breaks the previous record of £779 million, which was achieved in 2005/06 tax year when the tax relief was temporarily increased to 40%.  This is still with 6 weeks of the tax year still to run. The short and long term impact that the VCT scheme is having in stimulating British enterprise cannot and should not be underestimated.”

Rachel Le Derf, Head of Sales & Marketing at Amati Global Investors comments: “The Amati team has developed a strong following over recent years and we are delighted to see the continued support for the Amati AIM VCT in what remains a challenging environment.”

The VCT has already raised £40 million under the current offer which raised the full amount in four days. However, following a period of strong investment activity the VCT’s board decided to use the £25 million overallotment facility. 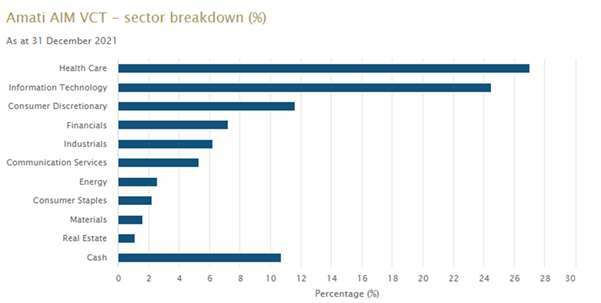 The VCT invested in Keywords through its IPO in 2013 and it is now the trust’s second largest qualifying holding, representing 5.2% of the portfolio (January 2022).

Keywords Studios provides creative and technical services to the video game industry and is now one of the biggest game development outsourcing companies in the world. Today, Keywords aims to be the “go-to” provider for the gaming industry, offering a broad suite of services which covers everything from concept art to speciality engineering requirements[2]. This has helped the company secure partnerships with 23 of the top 25 most prominent game companies in the world, with names such as Sony, Microsoft, and Nintendo on its books.

Valkyrie ushers in age of THE highest-fidelity motion...