Our website publishes news, press releases, opinion and advertorials on various financial organizations, products and services which are commissioned from various Companies, Organizations, PR agencies, Bloggers etc. These commissioned articles are commercial in nature. This is not to be considered as financial advice and should be considered only for information purposes. It does not reflect the views or opinion of our website and is not to be considered an endorsement or a recommendation. We cannot guarantee the accuracy or applicability of any information provided with respect to your individual or personal circumstances. Please seek Professional advice from a qualified professional before making any financial decisions. We link to various third-party websites, affiliate sales networks, and to our advertising partners websites. When you view or click on certain links available on our articles, our partners may compensate us for displaying the content to you or make a purchase or fill a form. This will not incur any additional charges to you. To make things simpler for you to identity or distinguish advertised or sponsored articles or links, you may consider all articles or links hosted on our site as a commercial article placement. We will not be responsible for any loss you may suffer as a result of any omission or inaccuracy on the website.
Home Finance BIS warns of $80 trillion of hidden FX swap debt
Finance

LONDON (Reuters) – The Bank for International Settlements (BIS) has warned that pension funds and other ‘non-bank’ financial firms now have more than $80 trillion of hidden, off-balance sheet dollar debt in the form of FX swaps.

Dubbed the central bank to the world’s central banks, the BIS raised the concerns in its latest quarterly report, in which it also said this year’s market upheaval had, by and large, been navigated without many major issues.

Having repeatedly urged central banks to act forcefully to dampen inflation, it struck a more measured tone this time around and also picked over the ongoing crypto market problems and September’s UK government bond market turmoil.

Its main warning though was what it described as the FX swap debt “blind spot” that risked leaving policymakers in a “fog”.

FX swap markets, where for example a Dutch pension fund or Japanese insurer borrows dollars and lends euro or yen in the “spot leg” before later repaying them, have a history of problems.

They saw funding squeezes during both the global financial crisis and again in March 2020 when the COVID-19 pandemic wrought havoc that required top central banks like the U.S. Federal Reserve to intervene with dollar swap lines.

The $80 trillion-plus “hidden” debt estimate exceeds the stocks of dollar Treasury bills, repo and commercial paper combined, the BIS said, while the churn of deals was almost $5 trillion per day in April, two thirds of daily global FX turnover.

For both non-U.S. banks and non-U.S. ‘non-banks’ such as pension funds, dollar obligations from FX swaps are now double their on-balance sheet dollar debt, it estimated.

“The missing dollar debt from FX swaps/forwards and currency swaps is huge,” the Switzerland-based institution said, describing the lack of direct information about the scale and location of the problems as the key issue.

“In times of crisis, policies to restore the smooth flow of short-term dollars in the financial system (e.g. central bank swap lines) are set in a fog.” 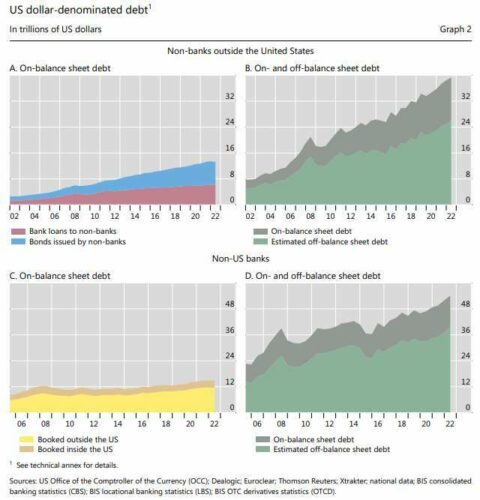 The report also looked at the broader market developments over the last few months.

BIS officials have been loudly calling for forceful interest rate hikes from central banks as this year’s inflation spike has taken hold, but this time it struck a more measured tone.

Asked whether the end of the tightening cycle may be looming next year, the head of the BIS’ Monetary and Economic Department Claudio Borio said it would depend on how circumstances evolve, noting also the complexities of high debt levels and uncertainty about how sensitive borrowers now are to rising rates.

“The simple answer is one is closer than one was at the beginning, but we don’t know how far central banks will have to go.”

“The enemy is an old enemy and is known,” Borio said, referring to inflation. “But it’s a long time since we have been fighting this battle”. 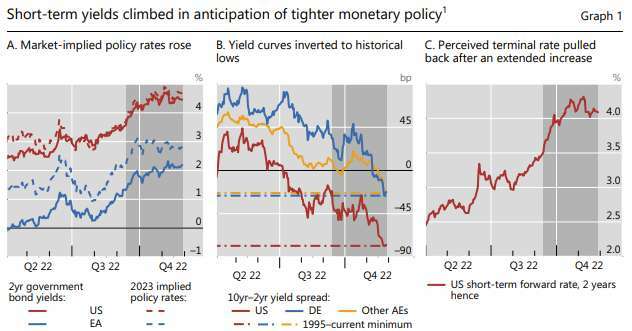 Other sections of the report focused on findings from its recent global FX market survey.

It estimated that $2.2 trillion worth of currency trades are at risk of failing to settle on any given day due to issues between counterparties, potentially undermining financial stability.

The amount at risk represents about one third of total deliverable FX turnover and is up from $1.9 trillion from three years earlier when the last FX survey was carried out.

The bank’s Head of Research and Economic Adviser Hyun Song Shin, meanwhile, described the recent crypto market problems such as the collapse of the FTX exchange and stable coins TerraUSD and Luna as having similar characteristics to most banking crashes.

He described many of the crypto coins sold as “DINO – decentralised in name only” and that most of their related activities took place through traditional intermediaries.

“This is people taking in deposits essentially in unregulated banks,” Shin said, adding it was largely about the unravelling of large leverage and maturity mismatches, just like during the financial crash over a decade ago.

“What the episode has shown is that although crypto operates under the banner of decentralised, it is quite centralised in many respects.”