Home Headlines COVID, War and Fed push world stocks down for 4th day
Our website publishes news, press releases, opinion and advertorials on various financial organizations, products and services which are commissioned from various Companies, Organizations, PR agencies, Bloggers etc. These commissioned articles are commercial in nature. This is not to be considered as financial advice and should be considered only for information purposes. It does not reflect the views or opinion of our website and is not to be considered an endorsement or a recommendation. We cannot guarantee the accuracy or applicability of any information provided with respect to your individual or personal circumstances. Please seek Professional advice from a qualified professional before making any financial decisions. We link to various third-party websites, affiliate sales networks, and to our advertising partners websites. When you view or click on certain links available on our articles, our partners may compensate us for displaying the content to you or make a purchase or fill a form. This will not incur any additional charges to you. To make things simpler for you to identity or distinguish advertised or sponsored articles or links, you may consider all articles or links hosted on our site as a commercial article placement. We will not be responsible for any loss you may suffer as a result of any omission or inaccuracy on the website.
Headlines

By Tommy Wilkes and Saikat Chatterjee

LONDON (Reuters) – World stocks fell for a fourth consecutive session on Tuesday as a combination of rising COVID-19 cases in China, the war in Ukraine and worries about the Federal Reserve raising interest rates this week for the first time since 2018 hit confidence.

Though oil prices tumbled more than 5% with Brent crude back below $100 a barrel, spelling some relief for battered European stock markets and the euro currency, the market rebound signalled that sentiment was fragile.

“The forthcoming Fed and BOE meetings are seeing equities under pressure as the markets anticipate that central banks will continue to focus on bearing down on rising inflationary pressures, ignoring the potential need for looser policy against the backdrop of a deteriorating growth outlook,” said Stuart Cole, head macro economist at Equiti Capital.

European stocks had been rebounding in recent sessions but they remain down sharply in 2022.

A net 69% of respondents in a monthly fund manager survey expect the European economy to weaken over the coming year, the highest share since 2011, according to BoFA.

The 81 percentage point swing from February’s net 12% who still expected to see growth marks the biggest month-on-month drop since 1994.

In the United States, another sharp drop left the Nasdaq 100 down more than 20% from its record peak late last year. Wall Street futures pointed to more pain at the open.

A lack of major progress in Ukraine-Russia talks on Monday added to the nervousness while concerns grew of possible new tensions between China and the United States.

Washington has warned Beijing against providing military or financial help to Moscow after Russia’s invasion of Ukraine.. Chinese companies listed in New York fell sharply during premarket trade on Tuesday.

“The question we are asking is whether the markets have reached peak bearishness,” said Jack Siu, Credit Suisse’s chief investment officer for Greater China.

MSCI’s broadest index of Asia-Pacific shares outside Japan fell 2.82%, led by pronounced weakness in Chinese stocks. The index is down 11% so far this month. 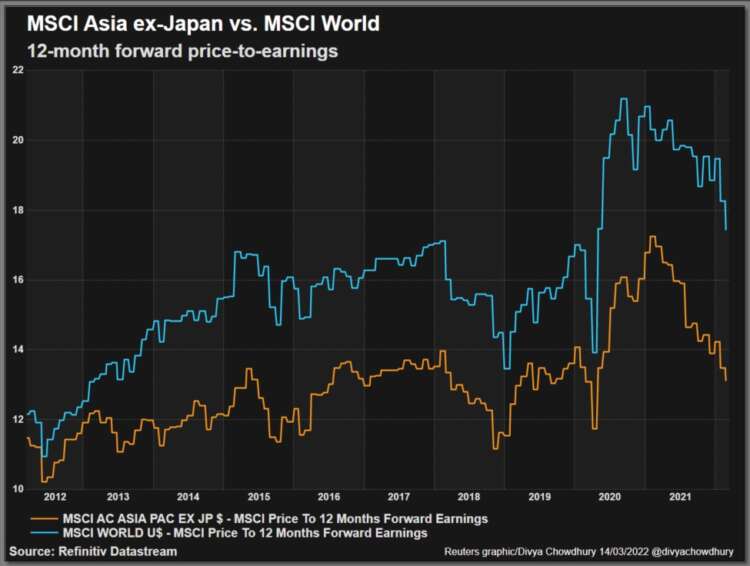 Hong Kong’s Hang Seng Index remained mired in negative territory on Tuesday, dropping 5.8% following an almost 5% selloff a day earlier. Hong Kong’s main board is down 19% so far in March — the index has not fallen so heavily in one month since 2008.

The city’s tech index has been hammered, falling 32% this month as investors worry about the next regulatory crackdown from U.S. and Chinese authorities on the sector.

ATTENTION TURNS TO THE FED

Adding to market jitters are rising case numbers of COVID-19 in China, which investors fear will hurt the mainland’s economic growth in the first quarter.

Brent crude fell nearly 7 % to $99.67.per barrel, while U.S. crude tumbled nearly 8% to $94.98 a barrel. Crude prices topped $130 a barrel only last week as investors fretted about a shortage of supplies worsened by sanctions against Russia after it invaded Ukraine.

Investor focus is also on the U.S Federal Reserve, which meets on Wednesday and is expected to lift interest rates for the first time in three years to offset rising inflation.

All eyes are on whether the Fed pushes a hawkish line and a commitment to keep raising until inflation is under control.

“We are not convinced by the ultra-hawkish arguments, but the FOMC may not be willing to consider dovish scenarios without clear signs of slowing economic growth,” said Steve Englander, global G10 FX research head at Standard Chartered.

“We think lagging real wages and falling disposable income will lead to a pause after July, but doubt the FOMC is ready to consider that case just yet.”

The two-year yield, which rises with traders’ expectations of higher Fed fund rates, touched 1.894% in Asian trading, a 2-1/2 year high, before falling back to 1.833%.

The euro, which was hammered last week on concerns the war in Ukraine would hurt the regional economy, rebounded and was last up 0.5% at $1.099. The dollar index fell 0.4%.