“The statistics show that a girl in Africa who can read has two children; yet a girl who can’t has five,” says James Alexandroff, settlor of the Perivoli Trust.

“This is a demographic time bomb” he goes on. “The population of the African Continent is forecast to be over 40% of the global population by the end of the century, up from 17% currently. Education, and in particularly nursery school education, has to be a key solution.”

Having studied law at the University of Bristol and then qualifying as a solicitor, James became a fund manager, initially in Edinburgh and then in the Far East. He co-founded an emerging marketsfocused investment firm in Singapore in 1996 called Arisaig Partners and gifted his one third share into a Trust, the Perivoli Trust.  Perivoli means “garden” or “estate” in Greek.

He now advises the Trust on its investing and philanthropic activities. Some of the investing is carried out through Perivoli Innovations, which focuses on early-stage high risk venture businesses with a positive societal impact – four in particular: health, climate change, social inclusion and productivity.

Over fifty investments have been made over the last five years, a third of which are in Africa, the rest in the UK – mostly in spin-out businesses from the Universities of Oxford and Bristol. “It’s a long game but a very exciting one,” said James.“We’ve had two rewarding exits so far and several more are starting to bubble encouragingly”.

The aim is for Perivoli Innovations to increasingly fund the philanthropic activities in the future which are channeled through a UK charity called Perivoli Foundation. Up until now, the philanthropy has been paid for by the Perivoli Trust. The philanthropy is mostly directed at Africa, in particular towards nursery school education.

“We’re working with nursery schools because that’s where the need is greatest as it’s an informal, unregulated, underfunded space,” said James.“And, as we all know, addressing children when they are very young is where the greatest long term impact can be made.

“Our goal is to see dropout rates in primary schools decline from what are currently high levels across the Continent. This could be avoided if children were given the opportunity to engage in more play activities, the importance of which is sadly not well appreciated in the region.”

The nursery school project is run through the Perivoli Schools Trust. “It’s a training model and it’s a much more effective and scalable approach than actually building schools. It doesn’t matter whether the teaching takes place in a mud hut or a brick building; what matters is the teaching”.

The Trust has already trained over 10,000 nursery school teachers over the past seven years in three countries, Namibia, Malawi and Zambia, and is currently launching in Ugandaand Botswana. It will target 200,000 more teachers across nine countries in sub-Saharan Africa over the coming decades. It has already reached about 250,000 pre-school children in the two to seven age bracket, with 5 million being the target.

“It has to be affordable,”James says. “There’s no point in providing Lego and such like as that tends to walk out of the door. Our approach costs about USD 3 per child per annum”.

The Trust’s approach is to show nursery school teachers how to organise their classrooms and how to make stimulating and educational activities out of recyclable materials. “Invariably, until our involvement, very little is going on in the classrooms. The teacher and the children sing songs and then just fall silent with glazed eyes.

“Whereas rummaging around in a waste paper basket, one can come up with a toy shop, a counting game, a matching game, a dressing up box, a music corner and so on, using empty yoghurt cartoons, bottle tops, tin cans, pieces of cardboard, an old piece of string and other materials.

“I sometimes describe it as “Blue Peter on steroids”. The children don’t mind if it’s a counting game made out of an egg tray and bean pods. They are just delighted to have something to do. Their teachers equally. It’s very rewarding when you go into a classroom and the children don’t even look up because they’re so engaged in what they’re doing.”

The Trust employs Perivoli Trainers, almost 200 from next year, who deliver 16 training modules to up to 25 nursery school teachers at a time over a two year period. The Trainers run support groups, where the teachers exchange ideas for games to make; and they also visit them in their classrooms once a month in the first year and once every second month in the second year to help with the implementation of the programme. The idea is for each classroom to end up with twelve so-called Perivoli Corners of play activities which the children can take themselves off to as they wish.

At the end of the course, the nursery school teachers are awarded with Perivoli Certificates in what is often a moving graduation ceremony where they dress up in gowns and mortar boards, with this being invariably the first formal recognition of their lives.

“Each Perivoli Trainer is issued with a tablet computer and is required to collect data, only after obtaining the necessary written consents, on the teachers, the nursery schools, the children and the pace at which the 12Perivoli Corners are implemented. This allows the Trainer Coordinators to direct the Trainers at the teachers which need the most help and to measure their performance. With each tablet equipped with a geo-location sensor, Trainer Coordinators can check that the visits are taking place. The programme only employs local people who seem to really buyinto it, as do the nursery school teachers.

“I have made over a hundred visits to nursery schools across the region,” adds James. “And based on what I’m seeing I have no doubt that the programme makes a huge difference to the lives of the teachers and the children. It’s very uplifting to see the way in which it unlocks their creativity. But we have to validate that, so we are undertaking an exercise to track some of the children through primary schools to measure outcomes.

“It’s a race against time.We have to hope that with better education, people in the Continent will make wiser life choices, husband resources more carefully, pick better leaders and crucially attract more investment into more value adding activities to drive up productivity which is, after all, the driver of standards of living and, up to a certain level of income, happiness.” 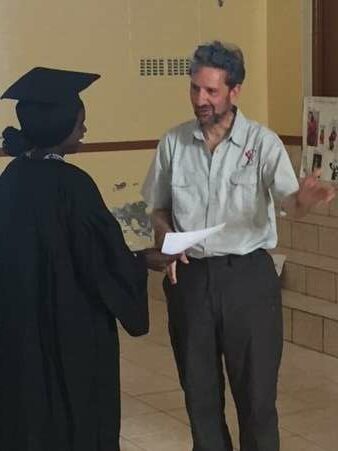 An interview with James Leinhardt, founder of Levitex

Microsoft to gobble up Activision in $69 billion...

UK economy finally bigger than before pandemic in...

The Ho-Ho-Homebuilding Boom: How is Santa Affected by...

Renewing democracy is ‘defining challenge of our time,’...

December 9, 2021
Editorial & Advertiser disclosure
Our website provides you with information, news, press releases, Opinion and advertorials on various financial products and services. This is not to be considered as financial advice and should be considered only for information purposes. We cannot guarantee the accuracy or applicability of any information provided with respect to your individual or personal circumstances. Please seek Professional advice from a qualified professional before making any financial decisions. We link to various third party websites, affiliate sales networks, and may link to our advertising partners websites. Though we are tied up with various advertising and affiliate networks, this does not affect our analysis or opinion. When you view or click on certain links available on our articles, our partners may compensate us for displaying the content to you, or make a purchase or fill a form. This will not incur any additional charges to you. To make things simpler for you to identity or distinguish sponsored articles or links, you may consider all articles or links hosted on our site as a partner endorsed link.