Our website publishes news, press releases, opinion and advertorials on various financial organizations, products and services which are commissioned from various Companies, Organizations, PR agencies, Bloggers etc. These commissioned articles are commercial in nature. This is not to be considered as financial advice and should be considered only for information purposes. It does not reflect the views or opinion of our website and is not to be considered an endorsement or a recommendation. We cannot guarantee the accuracy or applicability of any information provided with respect to your individual or personal circumstances. Please seek Professional advice from a qualified professional before making any financial decisions. We link to various third-party websites, affiliate sales networks, and to our advertising partners websites. When you view or click on certain links available on our articles, our partners may compensate us for displaying the content to you or make a purchase or fill a form. This will not incur any additional charges to you. To make things simpler for you to identity or distinguish advertised or sponsored articles or links, you may consider all articles or links hosted on our site as a commercial article placement. We will not be responsible for any loss you may suffer as a result of any omission or inaccuracy on the website.
Home Business Q&A with Forbes 30 under 30 winner – Alan Vey
Business 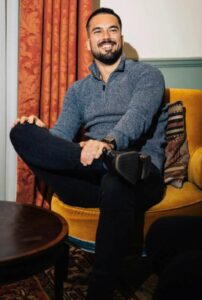 Alan Vey is a leading tech entrepreneur and expert. In 2021 he was a Forbes 30 under 30 winner and in this article, we take a deeper look into his background and thoughts on the blockchain space.

Tell us about your background

Growing up I was a very keen sportsman – playing golf nationally for Germany and also doing a lot of rowing. I learnt a great deal from sports in my younger years. It taught me discipline, that you have to work hard to get where you want to be, and how to perform under pressure. All things that have guided my journey through business, but also life.

My higher education journey started in 2012 with an undergraduate in Computing and AI, which sowed the seeds of my intrigue in blockchain. These really began to grow as I continued my studies with a masters in Artificial Intelligence at Imperial College London. It was during this masters that I started my enterprise-grade blockchain company, Aventus.

Those university years were very formative for me. My professors were excellent at changing my thinking of ‘how to get a good grade’ to actually understanding the industry. Ultimately that was really important for my creation of Aventus and then running and growing it. I’m very proud of how far it has come, and becoming a Forbes 30 under 30 winner was a huge moment for me.

What sparked your interest in blockchain?

Again, I owe a lot to my professors at university for this. I first approached Professor William Knottenbelt, Director of the Cryptocurrency Research Centre at Imperial, with my ideas to apply certain Artificial Intelligence algorithms to Bitcoin price prediction. However, he advised me that Bitcoin was old news.

Ethereum had just launched, and that presented really interesting growth areas and ones that I wanted to be part of. At that time, people were throwing blockchain at everything. I wanted to be sure that if I was to enter this space, it would be operating in an industry that was most suited to the tech.

The more I engrossed myself in it, the more I got excited about its use cases. The entertainment industry had been plagued with ticket touts and other issues that blockchain technology was more than apt for. So that’s where I chose to specialise at first with Aventus, which began as an open-source, decentralised Ethereum-based ticketing protocol designed to alleviate fraud and touting in the event ticketing industry.

What would be your advice to any budding entrepreneurs?

I think the first thing to remember is that the vast majority of the world is run by people no more capable than you are. So don’t hesitate to run with your idea. But you’re going to need thick skin. It’s hard work and a lot of people are against you, but it’s a rush when you get it right.

On that, don’t be disheartened if competitors or people you are networking with underestimate or challenge you. People doubting you can actually play to your advantage in certain circumstances. It allows you to learn much more as people don’t perceive you as competition or as a threat until it’s too late. Soak up all the knowledge of everyone around you and then prove them wrong.

And lastly, something that I mentioned was ingrained in me early on through sports – discipline is key. Keep pushing on, even when there is no clear path. It can often feel demotivating when opportunities fall through. However, in reality only a small percentage of opportunities in business convert – but that’s all you need to make a success. The harder you work, the more opportunities you will earn – so never underestimate the power of hard graft!

Which use cases of blockchain are you most excited about?

I think in particular NFTs are a really interesting space. If blockchain meant nothing to the average person before, it can be argued that it was NFTs that finally propelled the technology into the mainstream. NFTs enable brands to create value through scarcity and reward loyal customers.

NFTs are unique because they are built on a blockchain ledger. Exclusivity and scarcity are inherent, attaching value to them. While the hype around NFTs has since lessened, they’re most certainly here to stay and businesses will find new ways to utilise them to encourage further interactions and investment from their consumers.

As I mentioned earlier, the ability to tackle fraud and ticket touting is also a hugely exciting area. The ultimate goal is to create widespread adoption of blockchain technology.

Why is Web3 so crucial for every business?

Firstly, I think it’s really helpful to explain what exactly is meant by Web3. Web1 was ‘READ’, accessing data that was hosted on the network. The second phase, Web2, added ‘WRITE’, which enabled user-generated content to be shared via apps like Facebook, Instagram, and Twitter. The third iteration, Web3, added ‘OWN’, offering users the ability to truly own in a digital context and not just have a digital representation of physical ownership.

Blockchain technology is a general-purpose tool at the heart of allowing consumers to own digital content which defines Web3. The distributed ledger technology, which is the core component of a blockchain, enables items that live in the ledger to be truly immutable. This can solve a multitude of pain points.

Anything from improving audit traits for things like cargo tracking for the aviation industry to securing ticketing in the events industry. Blockchain enables organisations to become decentralised. While not every business will be suited to a decentralised model, for those that can implement it, it will allow them to share the functionality of the business across multiple points.

Businesses can adopt ‘permissioned’ instances of networks – meaning that they benefit from the speed, security, and interoperability of a blockchain while maintaining full control over all transaction activity, and actually enhancing its anti-money laundering capabilities for example.

Businesses that don’t want to be left behind when the era of Web3 fully comes into its own, should already be exploring how blockchain technology could improve their operations. A smart business invests in its future and the future is most definitely Web3.

Creating a truly diverse and inclusive environment in business

Five actions every SME should take in 2023

Why entrepreneurs will thrive in a challenging year

The Best Piece of Advice for Small Business...

A Glimpse into the Day of a Small...

What you need to know about raising funds...

10 Leadership Trends You Are Likely To See...