Home Finance Retail investors escape from British equities and the pound
Our website publishes news, press releases, opinion and advertorials on various financial organizations, products and services which are commissioned from various Companies, Organizations, PR agencies, Bloggers etc. These commissioned articles are commercial in nature. This is not to be considered as financial advice and should be considered only for information purposes. It does not reflect the views or opinion of our website and is not to be considered an endorsement or a recommendation. We cannot guarantee the accuracy or applicability of any information provided with respect to your individual or personal circumstances. Please seek Professional advice from a qualified professional before making any financial decisions. We link to various third-party websites, affiliate sales networks, and to our advertising partners websites. When you view or click on certain links available on our articles, our partners may compensate us for displaying the content to you or make a purchase or fill a form. This will not incur any additional charges to you. To make things simpler for you to identity or distinguish advertised or sponsored articles or links, you may consider all articles or links hosted on our site as a commercial article placement. We will not be responsible for any loss you may suffer as a result of any omission or inaccuracy on the website.
Finance

Retail investors escape from British equities and the pound

Spectrum Markets, the pan-European trading venue for securitised derivatives, has published its SERIX sentiment data for European retail investors for December (see below for more information on the methodology), revealing that of all investible equity indices the UK’s FTSE 100 experienced the most long-selling and short-buying activity.

Since the SERIX value on the FTSE 100 stood at 100 in September 2021, representing an equal balance of buying and selling, the curve sloped sharply into bearish territory in the months thereafter, finally reaching a value of 87 in December, the lowest monthly value for the index since the SERIX was introduced as a benchmark. In contrast, positive investor sentiment can be observed in the Italian MIB 40 index (101), the Spanish IBEX 35 (104) or America’s NASDAQ 100 (103).

At the same time, the British pound also lost investor confidence. Here, the SERIX value for the GBP/USD currency pair fell from 112 in November to 97 in December, which also indicates a bearish investor sentiment. A similar trend can be seen for sentiment around the currency pairs GBP/JPY and GBP/EUR.

Looking at the SERIX data for the top three underlying markets, the NASDAQ 100 and DAX 40 were relatively unchanged at 103 and 99 respectively. Meanwhile the S&P 500 rose slightly, from 97 to 98, while remaining in the bearish zone overall.

A lot of things have come together in the UK: Brexit, which took effect in 2021, increased trade costs, leading to a decline in trade volume and relocation of company headquarters. The loss of EU freedom of movement drew workers away, further increasing production and distribution costs. There is a national shortage of lorry drivers, but also of care workers and of workers in the food processing industry, leading to supply bottlenecks. In addition, the UK has also been hit hard by the global supply chain crisis and the associated price rises and, finally, Omicron dampened hopes of recovery.

“Overall, it seems retail investors simply did not see much in the way of encouraging signs in the UK market at the end of the year and – on the contrary – even see it as overvalued, which is illustrated by the numerous bearish positions on the FTSE 100 index. Investors also do not seem to consider the slight recovery of the FTSE to be sustainable in the long-term or sufficient cause for optimism. Alternatives such as the Spanish IBEX or the Italian MIB currently seem to be more convincing to Index investors,” explains Michael Hall, Head of Distribution at Spectrum Markets. 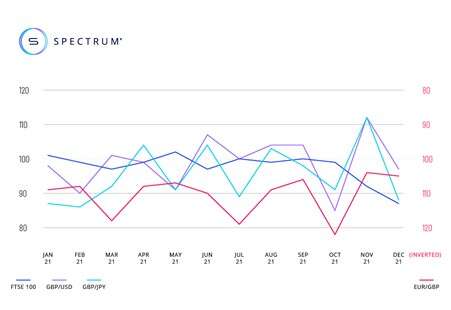 The index is calculated on a monthly basis by analysing retail investor trades placed and subtracting the proportion of bearish trades from the proportion of bullish trades, to give a single figure (rebased at 100) that indicates the strength and direction of sentiment:

Nucleus Research Positions Infor as a Leader in...

What impact could the 4-day working week have...

Change ups the stakes with launch of first...