Home Headlines Stocks slide as oil surge rattles inflation fears
Our website publishes news, press releases, opinion and advertorials on various financial organizations, products and services which are commissioned from various Companies, Organizations, PR agencies, Bloggers etc. These commissioned articles are commercial in nature. This is not to be considered as financial advice and should be considered only for information purposes. It does not reflect the views or opinion of our website and is not to be considered an endorsement or a recommendation. We cannot guarantee the accuracy or applicability of any information provided with respect to your individual or personal circumstances. Please seek Professional advice from a qualified professional before making any financial decisions. We link to various third-party websites, affiliate sales networks, and to our advertising partners websites. When you view or click on certain links available on our articles, our partners may compensate us for displaying the content to you or make a purchase or fill a form. This will not incur any additional charges to you. To make things simpler for you to identity or distinguish advertised or sponsored articles or links, you may consider all articles or links hosted on our site as a commercial article placement. We will not be responsible for any loss you may suffer as a result of any omission or inaccuracy on the website.
Headlines

By Herbert Lash and Tommy Wilkes

NEW YORK/LONDON (Reuters) – Oil prices soared again on Thursday as the Ukraine war sparked a run on commodities that raised fears of “stagflation” and stocks on Wall Street and in Europe fell as investors hoped central banks will be prudent as they move to tighten monetary policy.

The fresh surge in energy prices heightened worries about the European economic outlook, leading the euro to slide to its lowest level in almost six years against Britain’s pound and pinning it near 21-month lows versus the dollar.

Brent crude futures, the international benchmark for oil, climbed to within 16 cents of $120 a barrel before paring gains on signs of progress toward removing remaining issues blocking a revival of the 2015 Iran nuclear deal.

The price of aluminum, copper and nickel rushed to fresh highs as the widening sanctions on Russia for its invasion of Ukraine threatened to further disrupt the flow of commodities from one of the world’s major producers.

“Markets are trying to recalibrate what the Fed will do and its views on inflation,” said Jeff Mortimer, director of investment strategy at BNY Mellon Wealth Management, adding that Jerome Powell is proving to be a pragmatic chair of the Fed.

“To us it’s how to get a handle on what’s inflation going to be six, nine, 12, 15 and 18 months from now. That is really the critical question that we really are trying to answer.”

U.S. stock indexes initially rose, extending a rally on Wednesday after Powell pointed to a cautious tightening due to uncertainly driven by the Ukraine conflict. But they later fell.

U.S. and German government bond yields retreated as investors eyed potential monetary tightening. Money markets in Europe are now pricing in a 95% chance of a 30 basis-point hike in interest rates from the European Central Bank by year-end.

Bond yields have whipsawed violently this week as investors try to gauge the sanctions imposed on Russia due to the Ukraine invasion against expectations central banks will need to raise rates to address stubbornly high inflation.

Everything from coal to natural gas and aluminium are surging as Western nations tighten sanctions on Russia following its invasion of Ukraine. Russia calls its actions a “special operation”.

“Russia supplies around 30% of Europe’s gas and oil imports and accounts for around 11% of world oil production,” said Shane Oliver, head of investment strategy at fund manager AMP. “In short, investors are worried about a stagflationary shock.”

Three-month nickel on the London Metal Exchange (LME) rose to its highest since April 2011,

MSCI added to Russia’s financial isolation by deciding to shut the country out of its emerging markets index, while FTSE Russell said Russia would be removed from all its indices.

In Asia, the rush to commodities lifted resource-rich Australian stocks 0.49%.

Overnight in Asia, Japan’s Nikkei managed a 0.7% gain, while MSCI’s broadest index of Asia-Pacific shares outside Japan nudged up 0.39%. 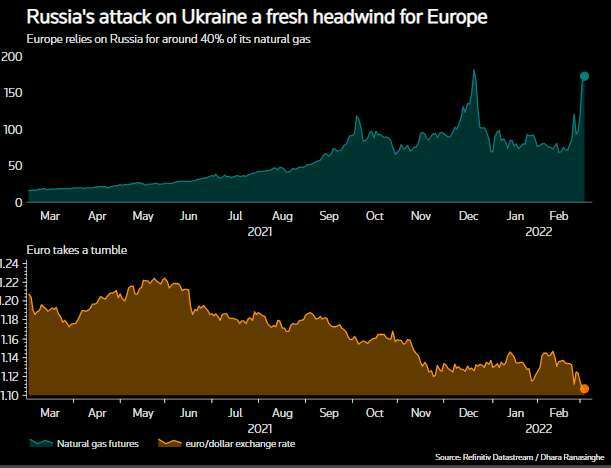 Google mandates workers back to Silicon Valley, other offices from April 4