Home Investment Wall Street seen opening higher but U.S. recession priced in
Our website publishes news, press releases, opinion and advertorials on various financial organizations, products and services which are commissioned from various Companies, Organizations, PR agencies, Bloggers etc. These commissioned articles are commercial in nature. This is not to be considered as financial advice and should be considered only for information purposes. It does not reflect the views or opinion of our website and is not to be considered an endorsement or a recommendation. We cannot guarantee the accuracy or applicability of any information provided with respect to your individual or personal circumstances. Please seek Professional advice from a qualified professional before making any financial decisions. We link to various third-party websites, affiliate sales networks, and to our advertising partners websites. When you view or click on certain links available on our articles, our partners may compensate us for displaying the content to you or make a purchase or fill a form. This will not incur any additional charges to you. To make things simpler for you to identity or distinguish advertised or sponsored articles or links, you may consider all articles or links hosted on our site as a commercial article placement. We will not be responsible for any loss you may suffer as a result of any omission or inaccuracy on the website.
Investment

Bullard said interest rates might need to hit a range from 5-5.25% from the current level of just below 4.00% to be “sufficiently restrictive” to curb inflation.

That was a blow to investors who had been wagering rates would peak at 5% and saw Fed fund futures sell off as markets priced in more chance that rates would now top out at 5-5.25%, rather than 4.75-5.0%.

“The Fed has come back through their speeches and pushed back against the market narrative – we are not going to see a pivot,” said Arun Sai, senior multi-asset strategist at Pictet Asset Management.

Sai said markets were currently “running on fumes” and would likely switch focus to the real economy’s response to rising rates, such as anecdotal signs of slowdown in the U.S. labour market. 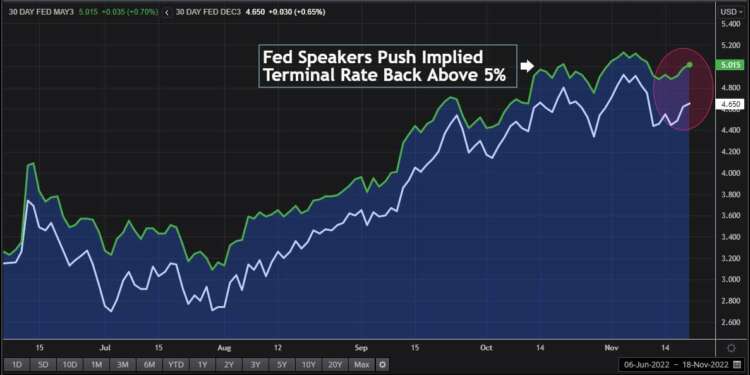 The MSCI world equities index rose 0.33% but was heading for a 0.5% loss on the week, coming off recent two-month highs.

Inflows into global equity funds hit their highest level in 35 weeks in the week to Wednesday, according to a report from Bank of America (BofA), as investor optimism brightened.

Euro zone banks, meanwhile, are set to repay 296 billion euros in multi-year loans from the European Central Bank next week, the ECB said on Friday, in its latest step to fight runaway inflation in the euro zone.

This is less than the half a trillion euros that analysts were expecting but still the biggest drop in excess liquidity since records began in 2000.

The European Central Bank may need to raise interest rates so much that they dampen growth as it fights sky-high inflation, while any runoff in the ECB’s bond holdings must be “measured and predictable”, its chief Christine Lagarde said earlier on Friday.

“The ECB will be wanting to show that it’s a strong institution and that it’s willing to fight inflation,” Jim Leaviss, Chief Investment Officer, Public Fixed Income at M&G Investments told the Reuters Global Markets Forum.

“There will come a time during 2023 where rates will come down from the ECB because the recessionary impulse will be quite severe.”

Britain’s FTSE rose 1% to two-month highs, a day after finance minister Jeremy Hunt announced tax rises and spending cuts in an effort to reassure markets that the government was serious about fighting inflation.

That left them 69 basis points above 10-year yields, the largest inversion since 1981 and an indicator of impending recession. [US/]

The euro held at $1.0375, having eased from a four-month peak of $1.0481 hit on Tuesday as some policymakers argued for caution on tightening.

Chinese blue chips dropped 0.45% amid reports that Beijing had asked banks to check liquidity in the bond market after soaring yields caused losses for some investors.

There were also concerns that a surge in COVID-19 cases in China would challenge plans to ease strict movement curbs that have throttled the economy.

Oil was on track for a second weekly decline, pressured by concern about the weakening demand in China and further U.S.interest rate rises [O/R]

Five reasons why gold should be part of...

Firstsource investment announced ahead of business forum at...